James Glucksman and James Boussy (aka “the Jameses”) have owned Pen-y-bryn since August 2010.  Born in the United States, and New Zealand citizens as of September 2018, the Jameses have lived and travelled all over the world but have decided to make their home in Oamaru and are eager to show off their adopted home town to their guests.

James Glucksman had a career in international management consulting and healthcare for more than 20 years, living and working in more than forty countries all over the world. Fluent in Russian and Mandarin Chinese, and with a very good knowledge of French, Spanish and German (as well as some limited Japanese and Hungarian), James’ first love was always fine food and wine.  He is a member of the Slow Food movement (the international organisation that promotes local and sustainable foods) and is Chancelier Honoraire of New Zealand branch of the Confrérie de la Chaîne des Rôtisseurs, the Paris-based gourmet society.

James Boussy was trained as a dentist, and practiced in the US state of Virginia for 15 years before moving his practice to Beijing. James is also a highly skilled baker, gardener and home renovator, and has made a name for himself among his friends for the exquisite gingerbread houses that he creates as the centrepiece of the Jameses’ annual Christmas party. 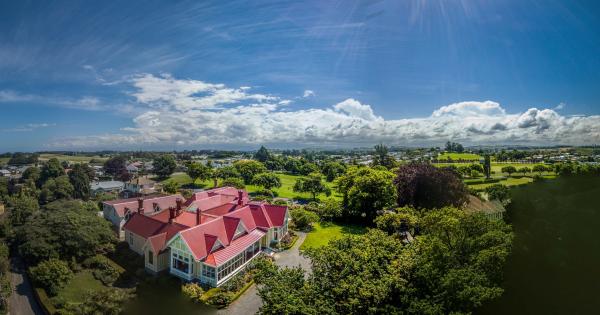 How did two gentlemen from the US residing in Beijing choose Oamaru to realise their hospitality dream?

We literally looked all over the world before hitting on the idea of looking at New Zealand for this plan of ours. But after considering France, Italy, South Africa and other places, New Zealand seemed to have an unbeatable combination of attractions: English-speaking, wine producing, popular as a tourism destination, and welcoming immigrants, that had a stable government and economy and no poisonous animals (a concern since we would be moving with our dogs). When we started looking at New Zealand we were introduced to Pen-y-bryn by one of the estate agents we had contacted, since she had ascertained that James B wanted a big garden and I wanted a big kitchen and dining room, and Pen-y-bryn had both of those features, plus countless others that we hadn’t even thought to look for. After a virtual tour of Oamaru on Google Earth we decided it was worth making a special trip just to look at this one town—and this one house—and immediately on driving up the driveway and catching our first glimpse of the house, we knew we had found the place for us.

Can you think of a time when you made the impossible become possible?

We only realised in hindsight that what we were trying to do was nearly impossible—to persuade people that this town they had never heard of was worth putting on their itineraries when travelling to a country on the far side of the globe in order to discover the things that we discovered when we fell in love with Oamaru. But through a lot of work on our own part, along with that of many others who have similarly fallen in love with Oamaru and the Waitaki, this is now one of the hottest destinations in New Zealand, and even earned the title “Coolest Town in New Zealand” from Lonely Planet not long after we moved here.

At work, what puts a smile on your face?

The fact that just about every guest who walks through our front door says “wow” when they see the lodge for the first time, and the “wows” just keep coming throughout their time with us, whether it’s after they have their first encounter with our wildlife, or taste our amazing wines or whiskies, or enjoy a meal with us. It’s a real pleasure to be such a surprise for people, especially in this day when everyone has seen everything on Instagram or other social media—we’re still just undiscovered enough to remain a bit of a mystery before our guests arrive.

And a frown? … The least favourite thing I hear—and I hear it often—is “if only we had known, we would have stayed here longer”. If Oamaru had a town slogan that could well be it, since so many people underestimate how long they should spend here, and often find themselves leaving long before they have had a chance to do all the things they wished they could have done. But happily for them, and us, this has begun to change and far more travellers are budgeting two to three nights with us, which gives them much more time to do the things they want to do without feeling like they’re rushing—much as I don’t mind returning from my own holidays in need of a rest, I appreciate that’s not everyone’s idea of a holiday!

What is your definition of luxury?

I am not a big fan of the word “luxury”, since I think it means too many different things to different people, and even in some cases the same person could perceive luxury very differently in differing circumstances. For me, luxury means having my needs anticipated before I realise I have them, and knowing that someone else is working to make sure that I can focus on what I enjoy doing without worrying about the basics. When I’m on holiday, that means someone else is doing the driving so I can literally focus on my photography and think about what I’d like to have for my next meal (no holiday for me is complete without things to photograph and memorable food and drink to enjoy). Other people, I’m sure, define luxury as having sheets of a certain thread count, and numerous staff on hand to bring them their favourite drink at a certain time of day—none of that matters to me, but as a host, I try to suss out what it is that will delight my guests and I endeavour to deliver that for them. This is another of those things that puts a smile on my face—making sure that my guests are able to enjoy their time with us the way they want to, rather than the way their travel planner or some other person thinks they should.

What is the perfect day out for guests of Pen-y-bryn?

This is something different for everyone, and one of the nice things about our part of New Zealand is that it’s the kind of place where there is literally something for everyone. When I first came to Oamaru and visited Pen-y-bryn for the first time, my perfect day consisted of heading out to watch the sunrise over the Pacific Ocean down by our waterfront or at the Moeraki Boulders—this is an amazing photographic opportunity that I still take advantage of when my schedule permits. Then I wandered the historic centre of town, which has an amazing and unparalleled collection of beautiful Victorian buildings, the likes of which you cannot find in too many other places. While these used to be gritty workaday places (woolstores, grain elevators, and customs houses, for example) today they are beautifully maintained shops, galleries and restaurants, and are owned and operated by some of the friendliest and most interesting (possibly “quirky” is a better adjective) people you’ll ever meet. You could spend days just visiting all of them, but there’s more to do! I would then go for a drive up the Waitaki Valley to see some of the amazing landscapes of North Otago, from the Elephant Rocks, to the Anatini Fossils and the Vanished World trail near Duntroon, and cap that off with a sampling of the wines of the Waitaki Valley in Kurow. After that I would come back to Oamaru and unwind at the lodge with an adult beverage and some canapés before heading to dinner in our dining room and preparing to see the blue penguins come in from their day out to sea at dusk. It’s a long day, so perhaps it’s better to spread it out over a few days, rather than trying to do it all in one!

In this world where “Social media raises the stakes for customer service” what is that special touch that reflects a real understanding of the guest’s preferences?

Every place will have its own special touches, but one of ours is that I have lived and worked in so many places around the world, and have really spent time immersed in so many different cultures that I think I have a better grasp of what it takes to make people from different places feel special. In some instances, it’s just the fact that they can speak with me in their own language, while in others it’s the fact that I know what they tend to prefer to eat at breakfast, or that they prefer to be addressed a certain way.

You are a Chef – what is your favourite local produce to prepare for guests?

It’s unfair for me to answer this question—Oamaru simply has too many amazing things to use in the kitchen! But among the things that I especially like to use are the asparagus from our garden (and from nearby Palmerston—the asparagus capital of New Zealand), along with the famous Oamaru Jersey Benne potatoes, without which Christmas just isn’t Christmas in New Zealand. Come autumn I do a lot with our quinces and apples, and our local venison and lamb are some of the best I’ve ever tasted.

Without a doubt, Waitaki Pinot Noir, hands-down! Our first visit to Oamaru gave us a chance to taste Caroline’s Pinot Noir from Ostler Wines right at the vineyard, and we were simply blown away by it. Never before had we had a Pinot Noir from outside of France that had the depth of character and nuance that one finds in Burgundian wines, but then several years later we read a wine writer’s review of Waitaki Pinot Noir and saw him refer to our region as the “Burgundy of the South”. We have yet to meet a wine drinker who isn’t amazed by the quality of Waitaki Pinot Noir, and it’s become our firm favourite.

Your ultimate NZ itinerary (including Pen-y-bryn of course)?

There are so many things to see and do in New Zealand, and so many decisions depend on the amount of time one has to spend, and what one likes to do. But for me, taking into consideration my fondness for good food, photography and wildlife, it would be the following: Fly into Christchurch and after spending a few nights there come down to Oamaru for two or three nights, where you’d enjoy our amazing gastronomic delights, our two varieties of penguin, and our landscapes, before heading down to the Catlins for a few days of some of the most exotic scenery you can find (be sure to stock up on Waitaki wine and Whitestone cheese before you leave Oamaru, since you might enjoy having a bit of a picnic while you’re down there). Then make your way to Te Anau for a visit to Doubtful Sound (and, if you have the time, Dusky Sound) and the beautiful Fiordland National Park. Visit Queenstown so you can tell your friends you’d seen it, but go one better and stay in Wanaka instead for a few nights—you get the scenery of Queenstown but without the crowds or the craziness, and to my mind the restaurants are better, too. From Wanaka you can drive up SH8 toward Mt Cook, where you can spend a few days on the trails and marvelling at the sheer beauty of the Southern Alps before continuing back up to Christchurch for your flight back home.